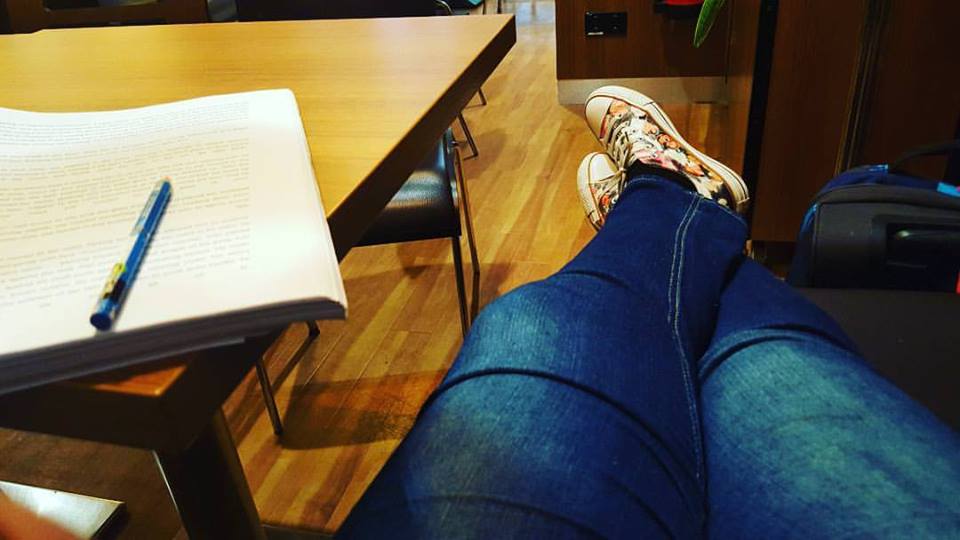 I decided to have a wellness morning yesterday, and attended a free writing workshop hosted by authors, Maire Fisher and Rahla Xenopoulos, as part of the Far South’s Blown Away by Books Festival.

The technique used is called Free Writing. At first I did not quite understand this free writing technique, because this is what I’ve been doing all along – write, and allow the story to craft itself as I type. No analysis, corrections or changes until it is done. The prompting, quite similar to what I’ve been doing with my #ThursdayTitleChallenge and the #TandemBlogging.

I thoroughly enjoyed being submerged in writing with no outside distractions. I loved it!

The first exercise required us to start writing with the prompt title, I am from. This was a 6 minute exercise and this is what I wrote:

I am from the smirk on his face as he stared humanity with disgrace.
Burdensome earth as she swept the muddy stairs.

I am from grace and beauty, eager and kind.
Her bosom embracing while arthritis settled through her bones.

I am from freedom born within.
Caged by darkness through slithers of hope.

I am the child of tomorrow, thanks to borrowed time.
Crashing down barriers and paving a new way.

I am from the stoic will, determined before my birth.
I am today, a reflection of tomorrow . . .

I am the reflection of a troubled past, a mirrored image fractured by history.

Then we read our pieces around our table of four, and then the next 6 minutes – we had to choose a phrase, line or sentence that we liked most, and then we continued writing. I chose; I am you, as you are me.

This is what I wrote:

Recalling a childhood, a past forgotten. A mist arose as my muddled mind began to froze.

“Not now”, shouted the voice in my head. Scrambling to recall my fear of the unknown, the untold stories.

“Not now”, rejoiced the voice in my head. Yet determined I pursued and sifted through the many locked memory boxes in my thoughts.

Finally a glimmer, a tiny white shoe, a drop of red came into view. “Not now!!”, screamed the voice in my head, as it shut the box before I could retrieve much more.

Frustrated, I clenched my fists as the Doc slowly brought me back from my hypnotic state. “Three, two, one; WAKE UP!”

Throughout this task, prompts were introduced that we had to include as we wrote, and this continued throughout our exercises. However, the next exercise was a title given to us. Then my mother turned to me  and said.

This is what I wrote as the prompts kept being introduced throughout the writing process – I can’t recall the prompt phrases or words as I just continued to shape the story as it was introduced:

Then my mother turned to be and said. “For heaven’s sake Spot, stop barking!” I continued, desperately trying to get her attention. Could she not see that the baby was pulling on the dishcloth?

I yapped at her heels, jumped on her legs, but she continued talking over the fence, desperate for the latest gossip.

“Stop barking!” she said, as she chased me away. My heart pacing as I ran up and down, unable to get through the door, desperate to protect. I scratched on the door.

“Spot, you know you’re not allowed inside” came her impatient voice as the cry of the baby came cutting through the crisp morning air. I watched in horror as the boiled water came crashing down. The dishcloth now forgotten as she shrieked in pain.

Finally, I remembered the bedroom window was open, as I rushed in to protect my sister Cals.

Mother by her side as I licked at her feet. Now the voice came coated in panic. “Please help, my daughter has been burned, we are at 94 Coolbert Street”. No longer was I asked to stop.

I forget what happened thereafter, as it all became a blur. I whimpered next to Cals as the medics carried her out.

Mom was absolutely distraught as she rushed to pull the gate close behind her, forgetting to say goodbye.

In that moment I felt lost, alone and scared. I failed my family, I laughed at the cruel lessons that life tries to teach all. But why use baby Cals to remind mother that my purpose in life is to protect, never to just interject. My family ALWAYS comes first, yet I am ignored . . .

Now here I lay, waiting at the gate, howling and sad, I wonder how my tiny human is doing. Watching her face burn as the boiling water spilled all over her is NOT a sight I’ll ever forget. How things can change within the blink of an eye.

Today is etched in history as I cried for the loving mother I once knew. The one who paid attention to my call as a tiny pup. But I suppose my charms must have worn off as I grew older, slower and sicker. Not once have I resented this life, but I do miss being part of the family who once adored me as their own.

I remember those sweet times. Early morning beach runs, frolicking in the ocean as my mom played frizbee with me. Not to mention the weekly treats I got for obedience. Oh how I miss those days.

“Hush!” I told myself, as I remembered Cals, and now I thanked my lucky stars that she left here alive, albeit crying in pain.

Family first, always. No matter what!

Suddenly the gate opened! It must have been a couple of hours later, but there stood dad, concern and guilt all over his face.

You see he should have been home, instead of down the road, “fixing a window” at his mistress’ house . . .

Writing by hand sure works the thumb!!! #eina Give me a keyboard any day! My handwriting slows me down 😂😂

Our next writing sprint, if you could call it that, was a starting line – It broke when. With this, prompts were also introduced throughout the writing process which we had to craft into our story. This process was more detailed as we first listened to a song, and then had to write various descriptive meanings of the song on pieces of paper before we got to the writing bit. Here’s my piece:

It broke when the drug lord sprayed the numbers on the Welcome wall of my hometown. I stared at it, not realising that 28 in fact resembled the change of my childhood as I experienced it.

This was in the late ‘90s when youthful exuberance reflected an ignorance, or rather, a complete disinterest of what was happening around me as my neighbours cheap weed and mandrax addiction filled the air.

The jagged edge reminds me of the slow deterioration of that stone cold wall as the municipality slowly cut away the tall trees to make way for development.

Sitting on the stoep, I listened to the romantic sounds of what I wish I had. But my; let me now digress, it broke when my mind stilled.

It broke when youthful lust became the currency of the daily trade. A new high as some may call it. The one that was sold by the straw and bankie loads at R50 a pop, while the numbers kept popping up on my community walls.

My mother said, “This scar reminds me every day” A reference made to the cut on her head when addiction threw a plat at her face. Recalling the day when he left with 28 tattood on his neck!

Alone I write my name, another protection order to keep me safe. Living in a home with violence, the current norm while your smile exposes your tyranny!

A community no longer free, as it is taken over by an addictive disease. “Tik, tick-tock, I come and take over your block” was the new sign on the Welcome wall. An entrance with no exit, unless you knew what needed to be done.

No longer can I run as I shoot up one last time, my father has won as I place the bullet in the gun.

A bell was rang to signal the end of the writing process, whenever you heard that bell you literally finished up your final sentence! Also remember that new prompts were added throughout the process. Not easy at all, but oh how I loved the mastery of the challenge!! As mentioned earlier, with each story we had to underline the parts of our story that we liked most. It could be a paragraph, a quote, a sentence, etc. and our final task then required us to choose 10, which we then used to write a Pantoum – a form of Malaysian poetry.

This was the outcome of my final task, my Pantoum.

I am you, as you are me
I forget what happened thereafter as it all became a blur
My purpose in life is to protect, never to just interject
Stop barking!

I forget what happened thereafter as it all became a blur
There stood dad
Stop barking!
I failed my family

There stood dad
Came her impatient voice
I failed my family
I am from stoic will, determined before my birth.

The change of childhood
I am you, as you are me
My fear of the unknown, the untold stories
My purpose in life is to protect, never to just interject.

I hope to attend more writing workshops in the future. The BIGGEST take home message for me was to respect my craft. I love to write!

2 thoughts on “My Wellness Morning of Free Writing”

It's raining outside and Vincent's stray cat frien