It’s not been easy. I honestly thought two kids would be as easy as preparing a 2nd lunch box in the morning.

Little did I know about the constant fighting and nagging that I’d have to endure, now living with two children who are both use to being the ONLY child. My son now has to share me and his grandparents permanently, while my niece tries to adjust to living away from her parents, in a household where there is routine and do’s and don’ts!

There have been tender moments of hugs and kisses, precious sights of Faith walking up to Kai, rubbing his back, after he’s bumped his toe. There’s been endearing moments where Kai cuddled up with Faith when she cried for her mom and dad.

These special moments fuelled me during the overwhelming and tiring times when I wondered if I’m going to survive these stubborn two kids, who seem to constantly shout at each other, and fight about the mine’s and not yours and leave its and give it to me’s.

The transition has not been easy for my son, but he too beams with pride when he understands her better, when she asks for help with a puzzle and when she says “thank you Kai”.

I too, feel great joy when I listen to her teachers commenting on how well she’s adapted in school, “one would never say she’s a new child at the school, everyone wants to play with her, and she is so at ease”. I listen to her speech become clearer and I, quietly, applaud her assertiveness, for as a girl, growing up in today’s society, she needs to have the strength to stand up for herself, even though I’m going to have to work on channelling it in the right direction…

Yes, two children, is so not what I thought it would be, and I’m really glad that Faith is living with us, even though she is darn hard work!! Really she is, I say with great love for her and honesty 🙂

Early this morning, like 7:30 am early, I beamed with pride, when she participated in her first speech and language therapy session. Her excitement was infectious! She did really well!

I then spent the morning at her school’s grandparents’ day. Sitting in the audience, she seeks me out amongst the crowd and gave me a beaming smile!! On stage, she stood tall, happy and confident as she sang with her class. She gave me big hugs and made lovely cards and flowers for her grandparents. She eagerly tried to introduce me to her friends even though she could not remember their names.

We have so much love for this precious child, my son and I, and it’s just so awesome to help and watch her grow.

“You open up a child’s world to endless possibilities when you place them in an environment where they are nurtured, and encouraged to thrive” – Chevone Petersen

She is so chuffed to have these two books to ‘read’ for the week. Speech & Language Therapy homework 🙂 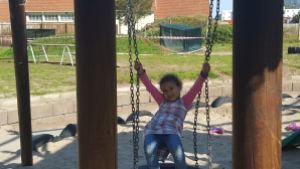 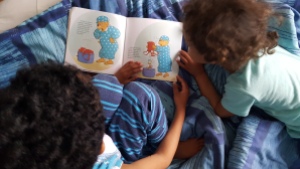 I love QUIET time, it’s so awesome that Kai can read to Faith!

PS – we have an amazing Speeth & Language Therapist, Carol Mestern, she is just freakin awesome! Kai’s been with her since 2011…