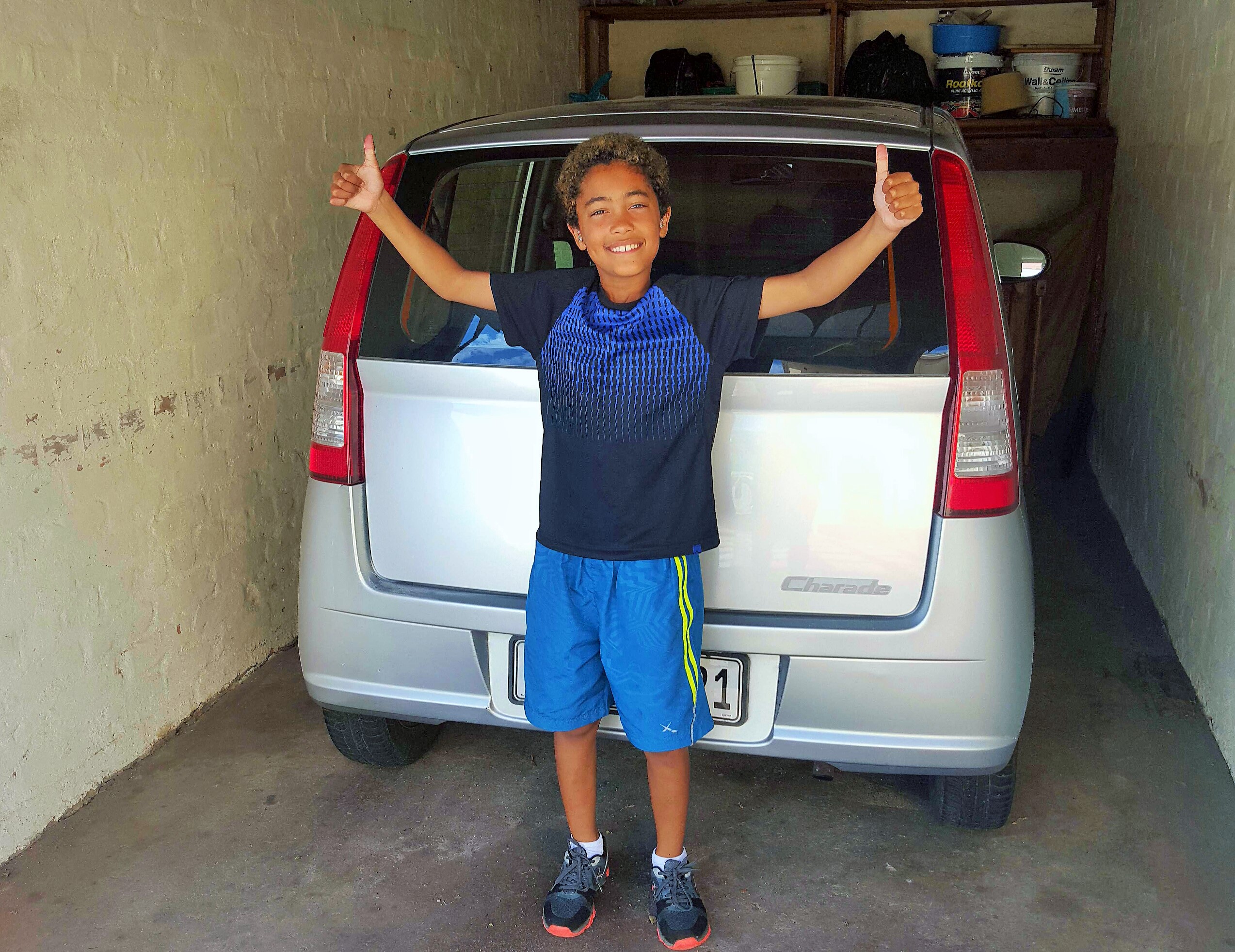 Click bait? No, this is exactly what I did! My son’s special interest is cars.  It is what he loves most in this world, with the exception of his Pa (my dad). And it is this very exception that made the acquisition of this car for my son even more crucial.

You see, earlier this year my dad downscaled and sold his Mazda 5. A process that we had to prepare my son for.  One that required my dad to keep him informed every step of the way, because letting go of the car was not going to be easy for my child. On the evening that the buyer confirmed the purchase of the Mazda 5 my son burst into tears and ran to the bedroom. His heart broke and continued to break for many months thereafter.

Then, my dad bought a small Citroen, but the car was tied up in some deceased estate (the irony!), and the seller couldn’t register the vehicle in my dad’s name. The seller, to compensate for this oversight, replaced the Citroen with a Honda Jazz.

By this stage my dad was hospitalised, diagnosed with stage 4 cancer and instructed that the car be registered in my name. Twelve days later he died, and the car was yet to be registered. Months after my father’s death and still zero progress was made with the registration of the vehicle!

Eventually, after numerous follow ups, I found out that the car wasn’t registered in South Africa. Needless to say, we debated the impact of this new information, and finally concluded that the best thing would be to return the car and get a refund, which my mom then did.

Now, to truly grasp the importance of this acquisition for my son, I need to take you even further back.

A few weeks before my dad was hospitalised I noticed that my son started withdrawing from my dad. Eventually, in his own time, overcome with guilt and concern, he told me that it was his fault that my dad was sick, because he approved of my dad selling his car, and he could no longer face my dad. He was convinced that my dad missed the Mazda 5 so much that it was making him sicker and sicker every day.

We spent the rest of that evening talking about the Mazda 5. We spoke about my dad being sick and how selling the car had nothing to do with his ill health.  I explained that my dad was not as attached to the car, or cars in general, the way he is.  I had to explain, and emphasise to him that he did not make the decision for my dad, nor did he convince my dad to sell the car.

This was a VERY difficult time for us.

The next morning we went to the shop and my son bought my dad a plant and they spent the rest of the afternoon relaxing on the bed together.  Watching TV and listening to the radio. A few days later my dad was hospitalised, never to come home again.

In our family a car is not just a car.  It is an attachment, a special interest that represents life in a way that helps my son make sense of the world and how he copes with the world around him. Pretty much similar to the way I makes sense of the world by observing people.

The loss of the Honda Jazz presented in a very different way. Anger and aggression!

Returning the car meant giving up his place of solitude, a place where he felt close to my dad and the Mazda 5, and all things wonderful. Suddenly, the empty garage became the physical reflection of his loss.

It was extremely distressing. His meltdowns started increasing in its intensity and length, his tolerance flew out the window and so did mine. Within days searching for a car became his only focus. It was the FIRST and LAST thing on my son’s mind. Every. Single. Day. Then add to this having a mother who has absolutely zero interest in ever driving a car or owning a car . . .  an explosive combination!

We however pushed through it all and towards the end of our exams I tasked him with finding a car. I gave him the small budget and my specifications. The car had to be small, automatic and could not have more kilometres than what the Mazda 5 had when my dad sold it.

The idea was that he would find the car, I would pay for it online and then we could ask for a delivery. At this point my only objective was to get a small automatic car to park in the garage so that he could sit in it. I needed to minimise his ever increasing levels of intolerance, his anxiety, emotional dysregulation and more.

Buying online however, was not an option according to my son and others.

So we arranged for some support.  We needed someone who understood the special interest and knew a bit about cars. We found this person in *M, a car enthusiast who also understands people like us, Aspies.

Kai, really took ownership of this process. I was guided by him and his recommendations. I literally stood around at dealerships while Kai and *M did the vehicle inspection and asked the questions. All I wanted was to get it over and done with. Honestly, watching paint dry would have been more exciting.

Well, a couple of weeks ago, he found the car.  A small Diahatsu Charade. He made the final call to the seller, and together with *M, negotiated the offer with great confidence.

The only things I checked on the car was the weight capacity and whether or not it can withstand the South Easter!

Since then Kai’s been counting down the days to 1 January 2018. The pressure is mounting as I told him no driving talk until the New Year!

Don’t get me wrong, I’ve driven a car before.  I failed my licence many times. The logic of, “you have to get your driver’s licence” is completely lost on me. I don’t need to drive. Never mind the anxiety caused by the unnecessary sensory overload and coordination required to navigate the vehicle! Whereas my son is completely at home in the driver’s seat behind the steering wheel.

But hey, when you have a child whose special interest is cars, all things cars, and his Pa, who also represented this to him, is no more, then you can bet your bottom dollar that I am damn well going to try this driving thing again! At least this is how I am psyching myself up to get behind the wheel and drive.

For now, I am content with my son having a car to sit in. A step in the right direction for everyone but me. Like I said, I have no desire to drive a car, even though the convenience factor is not lost on me entirely.

Damn it dad, you sure put me in a tight spot with this one!

*post read to, and approved by my son, Ausome Kai, for publication.