This weekend my patience was pushed to the limits! On Saturday morning we took Faith to Cape Town by train. It was her weekend with her mom and dad.

The train trip started off well, UNTIL she started spinning around the poles in the train! Then sitting down, and turning around every few seconds to watch the ocean.   Much to the annoyance of the lady who was “brave” enough to sit next to a 4 year old child! Faith’s backpack kept knocking into the lady’s arm, and Faith insisted that ONLY her mom could take her bag off. Never mind that her mom was waiting at Cape Town station, 23 stops away!

When the train pulled into Retreat, Kai sat on my lap to take a nap, and Faith had to sit down because the train was too packed for her to spin around the poles.  I suppose, the fighting was inevitable!!

She refused to sit in her seat and insisted that Kai get off my lap because she has dibs on me, and refused to share my lap with Kai! My son on the other hand started getting VERY worked up and Faith became aggressive, shouting and screaming, imagine a scene of wild animals fighting over their prey!! I was the prey; and I was so over this crap!

My dear son, finding the whole situation embarrassing and annoying finally conceded and sat next to me so that Faith could sit on my lap. All he wanted was a quiet train ride with no unnecessary embarrassment!

Railway passengers, I apologise that you had to endure a hour train ride with the bickering, shouting and crying. I apologise if you don’t have the ability to block it out.

Having have said all this, the minute we said goodbye to Faith, Kai already started missing her! Sweet cousin love!

Faith arrived back on Sunday, and I bravely decided to, again, travel with both kids to the concert in Muizenberg Park.

At Fish Hoek station, Faith insisted on leaning out the train window, which I eventually had to close for her own safety. She screamed and begged me to open the window, A LOT!  Kai and I both ignored her until she stopped. Passengers, I thank you bearing with me!!

On our way back from the concert, while waiting on Muizenberg station she climbed on the cannons, and then decided it a good idea to climb the light poles, a real little monkey this one!! One we boarded the packed train, she started spinning around the pole, and then started climbing the pole, and another brief “sibling” fight before we arrived at Fish Hoek station.

This 4 year old is a handful of energy from morning to night!! Right now she’s running around with a belt, pretending that it’s a puppy chasing her!!

Really can’t see myself traveling with both kids any time soon. A bottomless bucket of patience is needed, every day! 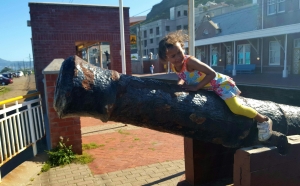 My monkey climbing the cannons on Muizenberg Station. 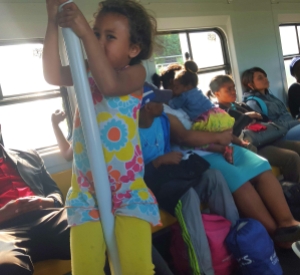 My Monkey climbing the poles in the train…gosh, the train stopped in Kalk Bay and she almost ran out! Luckily I have amazing reflexes and managed to stop her 🙂

This little monkey is teaching Kai lots of new tricks!