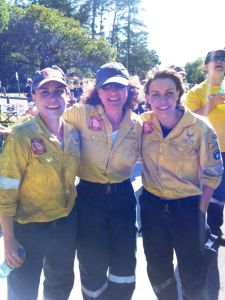 Marion Wagner pictured in the centre.

No words will ever articulate the immense gratitude that I and many others have for all the fire fighters, volunteers and donors who contributed to the heroic efforts, very long hours and sacrifices made during the devastating fires that raged in the Cape recently. THANK YOU, just doesn’t seem to do…

Marion Wagner, a Volunteer Wildfire Services (VWS) volunteer since 2013, was on the fire line during the first week of March. Goodness only knows where she got the time to answer these questions for me!

Why is it that when most people run from a fire, you’re out there, risking your butt, on the fireline?

Can’t really say that we risk our butts 🙂 We have excellent trained and experienced crew leaders whose job it is to ensure our safety and with VWS, safety always comes first. All the volunteers are passionate in making a difference and saving South Africa’s natural heritage, property and lives.

How do you prepare for a call out?

A call out message is sent via text message and VWS members, if available, are asked to respond with their name and ETA at base.

There is no obligation to respond. If you are on standby (generally one weekend a month in the fire season) or available to go out, you have your backpack packed with 4 litres of water, your PPE (flash hood, helmet, goggles and gloves), uniform, radio, head torch, spare warm clothes, food etc. ready to respond.

Key is to make sure that you are well hydrated and fit to go on the line. You are of no use to your team if you are unfit or unwell. You also need to be aware that you may be on the line for many hours. We also don’t race to base but proceed with safety in mind first. Fires will burn for many hours.

What is the first thought that crosses your mind when that VWS call reaches you at 1am in the morning?

You wonder how big the fire is!

How many volunteer hours did you put in from 1 March – 6 March?

Certainly nowhere near that some of the other volunteers did who were our every night! Approximately 27 hours – I was on standby duty on 28th February from 13h00 where we fought a fire behind Heron Park and returned home around 21h00. A few hours later on Sunday (1 March) at 02:22, the first call out came, asking us to respond to a fire in Muizenberg, Boyes Drive.

I reported to the South Peninsula base shortly thereafter but the decision was taken to reconvene at 6am so went home to wait. We spent the day on the left flank of the fire on Ou Kaapse Weg and made it home that night at 22h30.

I responded again on the Wednesday night (4 March) to Tierboskloof in Hout Bay to prevent the fire reaching the houses and again on Thursday night (5 March) at 18h00 to support Tokai. Due to a lack of available vehicles, I was part of the last team not sent out and spent time at Newlands base receiving supplies brought in by community members and talking to them which was a great experience too. What amazing kindness was shown by members of the public!

Please can you share with us your “routine” on one of the days you attended to the fire?

On the Wednesday night (4 March), I arrived home around 16h00, took the dog for a walk and then prepared my gear and left for Newlands base at 17h00. We left Newlands base around 17h30 and returned back to base just after 02h00 and then drove home again, few hours sleep and work again the next day.

Which areas did you respond to during this week?

Can you share with us the atmosphere on the ground at one of your call outs this week?

At Tierboskloof we worked together with local residents, City of Cape Town, SAN Parks Contractors, NSRI and Disaster Risk Management (am sure there were more that I have left off!). The atmosphere was very tense – understandably so as the thatched houses lay very close to the fire.

The City of Cape Town team had connected fire hoses to the hydrants but pressure was low and difficult to reach the roofs of the houses. Everyone worked hard to make a fire break – a line to prevent the fire jumping across which meant raking all the branches, grass, twigs and cutting the bushes back to reduce the fuel load.

The helicopters delivered 4 water drops which helped immensely and allowed us to move closer up towards the kloof to support the SAN Park contractors who were beating out the flames higher up.

Atmosphere is difficult to describe – the closer you get to the actual fire, the more the adrenalin flows but all the time, the first call that is made is one of safety. If there is no clear escape route or safety zone (burnt out area), then we don’t proceed. All the time, wind conditions are monitored to avoid the team being cut off by the fire. Everyone is trained to be on the lookout and feels that sense of responsibility to watch for any changes in fire behaviour or wind.

Can you describe what it is like on the fireline?

Hot – smoky – exhilarating and the challenge is to work safely to remove unburnt fuel in the path of the fire, push hot coals back and beat out flames if safe to do so. Time passes quickly as you are so focussed on the fire line. We work as team changing out to take breaks from the smoke and heat. While it can be serious work, there is also a huge amount of comradery and support.

I’ve seen many haunting images of fire fighters running through/away from flames, hose in hand! Please can you share with me the conditions that lead to a group fighting a fire the one minute, and the next, almost being engulfed by the flames?

The risk is always there of flare-ups happening, spotting when sparks from the fire ignite unburnt areas and the wind picking up. We generally do not make running through flames a practice 🙂 It may happen if there is spotting but our rule is to work in the black (burnt out areas) and avoid having unburnt fuel between us and the flames. We always knows where the safety zone and escape routes are to prevent the rare occasion of having to run through the flames.

What do your family have to say about you voluntarily risking your life at the drop of a hat?

Not surprised that I would volunteer but then again – they do understand that we don’t take huge risks – back to the safety practices again 🙂 My husband is generally more exhausted than me as he doesn’t sleep if I am on the line and then can’t sleep when I am back and crashed out!

What is the longest shift you’ve ever worked and why?

About 15 hours at the fire and 19 hours from home to base to the fire and back home. The reason being that it was the first day of the fire and we didn’t have additional crews available to change out with.

What is your routine after spending hours fighting a fierce fire?

Generally it’s getting out of the dirty uniform which is often drenched from either water drops or perspiration – leaving it outside the back door, a shower with several hair washes, couple of Ibuprofens and sleep!

What has your experience been with the public as a VWS volunteer when you are in uniform?

In the past it has been limited but recently with these fires, it has been amazing – free hugs everywhere 🙂 The public have been so appreciative, supportive and generous.

Do you think our government contributes enough to the efforts of organisations like VWS?

Government funding would be amazing and funding is always needed. When you look at the stats below and consider that every VWS firefighter, planner, director, driver etc. is a volunteer. 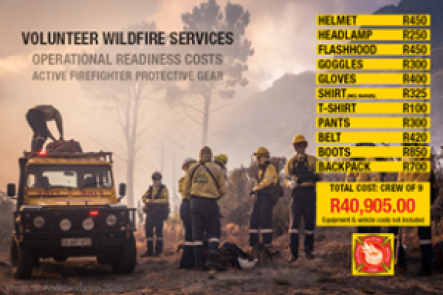 VWS is a Non Profit Organisation and remains operational by receiving funding from a few small corporate sponsors and organisational partners (Table Mountain National Park and CapeNature) as well as individual donors.

We also initiate our own fundraising projects, like the popular VWS Trail Challenge, the Jonkershoek Fire & Fynbos Awareness Day and the Newlands VWS Open Day. This vital funding allows us to continue to manage ourselves independently.

How can the public and business get involved in VWS?

Funding and volunteering are great ways to get involved. Public to do not have to be firefighters. There are many other positions which need to be filled within the following departments in VWS

We are currently a group of 150 men and woman from all walks of life. We assist with the combating and extinguishing of wildfires that occur in the Cape Peninsula and have 3 bases.

The VWS South Peninsula station will be holding two information evenings for recruitment 2015:   24th March 2015 and 14th April 2015 at 19h30 at 1st Fish Hoek Sea Scout hall, 58 Upper Recreation Road, Fish Hoek. More than 200 people have already stated that they will attend which is amazing and the largest response the station has ever received.

Do you understand that you are a local hero, a guardian of fire?

We are definitely not heroes :). We do what we love and what we have been trained to do. Normally we go unnoticed high up a mountain which we prefer and all the public sentiment has been quite overwhelming for all.

Who is Marion Wagner? 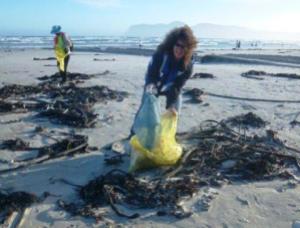 Marion picking up litter at a Beach Clean-up in Muizenberg.

She earns her keep as a Group
Marketing Executive for Breadline Africa (a non-profit company). Is a volunteer Director at Muizenberg Improvement District (NPC) and  she is part of the managing committee for Safer Together. She is also actively involved in Deaf Hands at Work, The Homestead Street Children’s Project and the local Neighbourhood Watch.

Marion playing with Storm on the beach.

Marion is married and lives in Muizenberg where she enjoys spending time with her rescue Border Collie.

The mind boggles! How is it possible for anyone to work full time and be hands-on involved in so many NPO activities?

Marion Wagner; our local ‘Guardian of Fire’. Thank you!

3 thoughts on “On The Fireline with Marion Wagner”