I’ve not had Faith for the weekend in a long time. She was so excited to hear that we fetching her, all she wanted was to go to the beach.

Friday Kai showed her his big school! It was Fun Sports Day for the Foundation Phase and she had such a blast! The open space, trees to climb and make believe snakes in the form of the school sprinkling system! 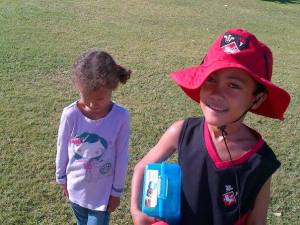 After the sports I went to work for a few hours, hoping that both kids would have a nap. No such luck!

Faith was so excited when I put her costume on and we headed to the beach in the blustery South Easter! Her entire body was shivering, but this did not stop her from having an absolute blast! 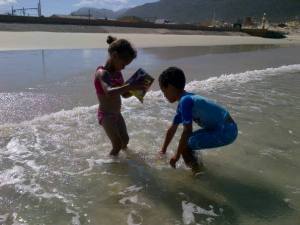 Thankfully, the busy day had her fast asleep before 7pm and Kai before 7:30 and me at 8pm on a Friday of all days!

Then today we went to Muizenberg beach, where she quickly befriended a dog. If they could then they would have brought this agile dog home with them. The dog played so nicely with them, still can’t believe I got them off the beach without any kicking and screaming tantrums! 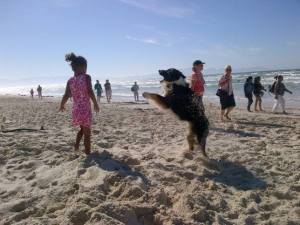 Then we walked along the catwalk to St. James, where they played in rock pools and raced the incoming tide! 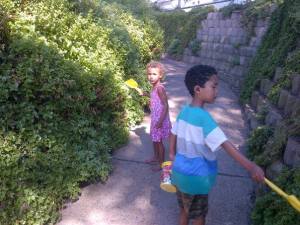 All the while referring to Kai as her “tjommie” (Afrikaans slang for friend).

It is always such a treat to have Faith with us, even though the long gaps between her visits results in her crying for “von, go mommy” every once in a while, especially at night 🙁