About 6 weeks ago I wrote this blog post, but never published it…

“My dad is really really driving me up the freaking wall! Don’t get me wrong; it is great that my son has this amazing role model when it comes to his hearing loss. But flippen hell, when it comes to him actually complimenting my parenting, he truly is the villain!

People often comment on how great it is that I have these “built-in babysitters”, not that I go out often; and even if I wanted to, their social lives are way more active than mine and requires me to always check their “availability”.

So why is my dad the villain? Well, let me put it this way, he always want to be the “hero”, the one coming to my son’s rescue (not that he needs rescuing) and contradiction everything I do!

Like this evening, my son was in one of his “moods”, no talking to him, no disruption of anything he’s doing, etc. and I asked him something and well, he flipped out, became so aggressive and shouted at me to “just keep quiet and leave him alone!”  So I switched the TV off and told him no TV for five minutes. What does my dad do? Invites him to watch TV with him!!

He has no freaking clue as to the issues I deal with, the outburst, the discipline, the meltdowns, the clashing of mother son wills!  He wants to be the hero, yet he actually spends very little quality/productive time with my son!

Just last week my parents moaned at me when I, after spending 2 hours outside with my son (a bike ride and beach walk), had a bath put on my pj’s and just read for the rest of the day (in between the whole parenting stuff).

I mean I am so entitled to just chill!! So I moaned right back! I really just lost it!

I told them that they can moan at me after they make the effort to actually take my son for his long bike rides, take him to the beach, make sure he reads a book every day and read to him every day! They can flippen moan at me when they get woken up in the middle of the night to deal with his pins and needles he gets in his hands and feet, or when he flips out because I’m going to the loo in the middle of the night! They can moan at me when they really take the time to put themselves in my shoes and see if they still have the patience to raise a child with what seems to be a growing list of needs or let me rephrase that, a child that requires adaptive parenting!

So this is my vent! Don’t get me wrong, my dad is my son’s everything, and I’ll never take this away from him. I love and appreciate that they have this strong bond. All I ask is for dad to get with the programme, to stop being such a jerk! He needs to realize that yes, it’s a grandparents “right” to spoil their grandkids, BUT, not if you live with that grandchild 24/7.

In my opinion grandparents actually become more co-parents than grandparents when they live with their young grandchildren. They can choose one day a week to “spoil”!

I used to have this same challenge with my mom, but since she’s become more involved, my back-up for therapy participation and school events, etc. And since she’s started attending some of the family mornings at Decibels of Love she’s beginning to understand a bit more.

She’s read his OT and Audiology reports; she’s read his Speech and Language and Edu-Psych assessments and all the recommendations and she really makes an effort, she is on “Team Kai”!

My dad on the other hand? Oblivious, the villain disguised as the “hero”. He’s not made any effort to read any of the reports or assessments (it’s been a month!). I suppose I should be grateful that he at least read his school report, but flip! If you want to be a hero then flippen start taking an active interest and BE PART of the journey, PLEASE!

As mentioned I never published this blog post, instead I asked my mom to read it and she agreed and shared my frustrations. She said “nou praat met jou pa!” Instead I convinced her to talk to my dad and explained that whenever I talk to him about Kai it’s like talking to a rock!

You see I think my dad’s been in denial when it comes to certain challenges my son have and he didn’t want my son to associate him with hard work, school, discipline, therapies, etc…

So my mom spoke to my dad 6 weeks ago, after reading the “unpublished” blog post… A few days later I saw the 26 page binded document on his desk. He’s been reading it!!

Small things started to change. A few Saturdays ago, my dad took Kai for an early morning bike ride. He now also takes him to the bike ramps when he’s not working on a Thursday.

Some evenings, like last week when we had loadshedding, he read a few chapters of the Twits to him! 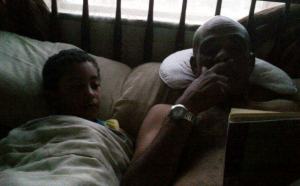 And yesterday, I worked late. When I arrived home, my mom just packed up Kai’s homework that she’s helped him with. Then big surprise, I checked his “other” work and saw that he made 2 errors and a few minutes later my dad sat down in my son’s desk and went through his “other” work with him!

My dad no longer interferes when I discipline my son. He’s also learned to “let him be” when he has a meltdown and crawls into a corner or under a desk.

It’s made a HUGE difference, this gradual change, this being PART of “Team Kai”. I can now actually have a conversation with my him about my meetings, my mom can actually tell him about a meltdown or reaction without him “dismissing” what we have to say.

There’s been a turning point, a welcoming breeze of change. I recognized this phenominal change when my dad  told me about a small private school in the area where he works. A school that we could perhaps consider as an alternative option if he’s not coping in his current school environment.

I was baffled, I couldn’t believe my ears! My dad, giving my son’s schooling and challenges this level of consideration and interest! Without ANY prompting from me, changing schools have not even crossed my mind, it’s not even been an option, especially when considering the costs!

My dad, no longer the villain, deserving of the hero title! Finally all members of “Team Kai” is on board! Thanks dad, we love you!! Feel free to moan at me now 🙂

0 thoughts on “Change is Possible…”