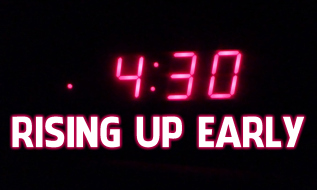 It’s exactly 5:00am and I’m laying awake in bed, reminded that last year this time, I would have been dressed, lunches would be packed and I would be getting Kai ready for school.

We would both still be in a half-awake-half-asleep state, yawning at every second breathe, preparing ourselves for a very very long day.

You see in 2013 Kai attended the Carel du Toit Centre in Parow. He travelled with private school transport and pick up was at 6:15 am at Retreat station, the nearest pick up point.

We would take the 05:35am train from Fish Hoek to Retreat, arriving at the station at 05:53am. Some days we risked taking the 05:52am train and rushed pass commuters and run over the bridge to the other side of the railway line where the driver would be waiting.

The worst time was winter, where we often waited in the rain outside a dark and shady Retreat station. Some mornings the driver would be up to 20 minutes late!

More often than not, I would be at work by 6:30am, preparing for a day filled with back to back interviews and sourcing candidates for positions. I would be absolutely knackered by 2pm!

I must admit, in June last year I was so very tired, I didn’t know if I could continue the early mornings anymore and had to remind myself that the school holidays were around the corner.

We really had very long days in 2013. Kai travelled for 4 hours a day. The 05:35am train from Fish Hoek to Retreat, then the school taxi to Parow at 06:15am (driving through Lotus River, Hanover Park, Athlone, etc. to pick up other kids), arriving at school at 07:50am. Then going to the school aftercare for an hour until 2pm and then dropped off at an aftercare in Heathfield at 3:15pm where I would fetch him at after 5pm. Often we only arrived home after 6pm (the unreliability of trains!). It is amazing how things work out though, because mid July I also started my current job, working from 9 – 4pm which meant that Kai would now get home an hour earlier!

We would both be “lights-out” by 7:30pm – a long day, knowing that we would have to repeat it all again the next day!

The only time I ever bought Die Son newspaper was in 2013 to keep up with gang violence. You see Kai’s school taxi picked up quite a few kids in the heart of gangland territory. I remember travelling with him one day and asking the driver why a dude with dark shades and arms folded in front of his chest, were just standing there. “He is the look out, he’s screening the area for any indications of possible attack” was his reply. “But the people know that I pick up deaf children so we are save…” he said!

I remember keeping Kai out of school for a few days last year as a result of gang warfare in Hanover Park. I just didn’t feel comfortable having Kai travel through the area knowing that people were being shot at…

The sad reality though is that many of Kai’s friends from Carel du Toit live in areas where gang violence is their reality. Happy children with enormous potential, growing up in communities ravaged by an illness; drugs and gangs.

I don’t miss the travelling! If it wasn’t for the travelling then who knows, Kai may still be at Carel du Toit today, completing Gr. 1 in a small classroom of 6-8 kids, an ideal learning environment for a child with hearing loss…

So here I am in bed, thinking about the immense sacrifices of 2013, and how far we’ve come today in 2014. Right now Kai is watching Phineas and Ferb on SABC3 whereas a year ago today at 05:40am he would be sitting in a train on his way to school…